CYP2J2 snuck into last place in the breakdown by Zanger and Schwab who analysed 248 clinically used drugs known to be metabolized by CYPs. Unsurprisingly in first place was CYP3A4/5, oxidising 30%, while CYP2J2 was responsible for oxidation of just 3% of these drugs.1 However this does not reflect the importance of CYP2J2.

Due to CYP2J2’s limited expression in the liver, CYP2J2 can easily be overlooked. This was highlighted by Lee et. al. who after examining 139 drugs revealed 8 substrates with wide structural diversity that were metabolised by CYP3A4 and unknowingly susceptible to CYP2J2.2 The difference between the two came in the regioselectivity, with CYP2J2 metabolism often restricted to a single position, likely due to the narrower active site. This is nicely illustrated in a paper exploring the regioselectivity and active site topology of CYP2J2 using terfanodone. Surprising regioselectivity was explained by a narrow hydrophobic channel containing several bulky amino acid residues situated above the heme, restricting access to the terminal sites.3

Well known drugs metabolized by CYP2J2 include astemizole, ebastine terfenadine, albendazole and vorapaxar. CYP2J2 can constitute the dominant CYP involved in a drug’s metabolism, such as hydroxylation of the anticoagulant rivaroxaban and hydroxylation of ebastine.4,5 It is CYP2J2 that catalyzes the hydroxylation reactions of ebastine, whereas CYP3A4/5 is mainly involved in dealkylation. Both enzymes contribute to carboxylation of hydroxyebastine to the active metabolite carebastine. 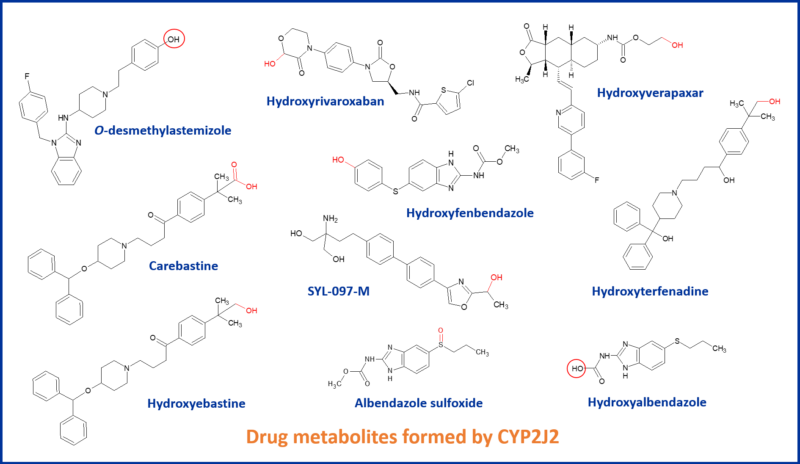 So why is CYP2J2 worth bothering about?

CYP2J2 is largely an extrahepatic enzyme, highly expressed in the heart and other tissues, notably the intestines and areas of the central nervous system. In the heart, it is particularly prevalent in the aortic endothelium and cardiomyocytes, and more broadly in the right ventricle.6

It’s role in the heart seems primarily to act as an epoxygenase, producing cardioprotective epoxyeicosatrienoic acids (EETs) by epoxidation of the double bonds of arachidonic acid, a polyunsaturated fatty acid. These metabolites comprise four regioisomers: 5,6-EET, 8,9-EET, 11,12-EET, and 14,15-EET. Each of them possesses beneficial effects against inflammation, fibrosis, and apoptosis.

The situation is made more complex by the rapid metabolism of EETs by soluble epoxide hydrolase (sEH) to the less biologically active dihydroxyeicosatrienoic acids (DHETs).  DHETs are devoid of vasodilatory action.

Studies show that elevation of EETs by overexpression of CYP2J2 or inhibition of sEH, conferred protective effects in various cardiovascular diseases, including hypertension, myocardial infarction, and heart failure.7

Evidence points to a complex interplay in the synthesis of these oxy-lipids and drug metabolism by CYP2J2. Drugs might inhibit EET synthesis through inhibition of CYP2J2, or metabolism of drugs in the heart by CYP2J2 may produce cardiotoxic metabolites and contribute to cardiotoxcity.8

In contrast to the positive cardioprotective effect of CYP2J2, it’s over expression is associated with many cancers. The expression of CYP2J2 and other epoxygenases are upregulated in some human tumour tissues and cell lines. This promotes angiogenesis and tumorigenesis, in part mediated by metabolism of EETs by COX enzymes. The work of Rand et al. shows that inhibiting both sEH and COX leads to a dramatic decrease in tumour growth, suggesting that the contribution of EETs to angiogenesis and subsequent tumour growth may be attributed to downstream metabolites formed by COX.9 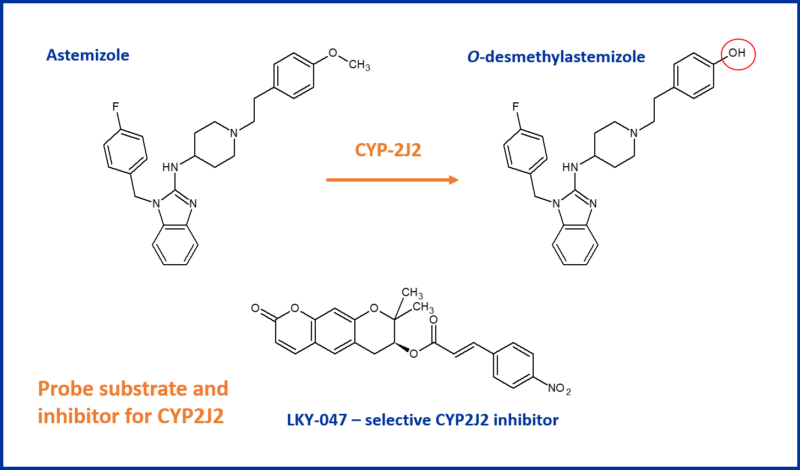 Interestingly, some inhibitors have been found to irreversibly inactivate CYP2J2. 17α-ethynylestradiol is a component of some oral contraceptives, and inactivates CYP2J2 through formation of heme and apoprotein adducts. What impact could this have? Indeed, Lin et al. suggest that people taking oral contraceptives as well as drugs preferentially metabolised by CYP2J2 may require dose adjustments to prevent adverse drug reactions.10

The recommended assay for assessing CYP2J2 inhibition is the O-demethylation reaction of astemazole, with the decurzin derivative LKY-047 as a selective control inhibitor. Other compounds considered e.g. danazol, telmisartan and flunarizine, suffered from CYP2C9 and CYP2D6 inhibition whereas LKY-047 has a 50-fold selectivity for CYP2J2.11

But there’s more to think about.

Chameleonic in nature, epoxygenases take on different conformations depending on the structure of the substrate. In addition, multiple molecules can concurrently bind to CYP2J2. The implication is that inhibitor studies should consider the effect of a drug on an endogenous substrate, instead of relying purely on probe substrate reactions. So an awareness of inhibition of both endogenous and exogenous substrates is needed.6

What does the FDA say?

The FDA’s current guidance12 on in vitro drug interaction studies, only mentions CYP2J2 in the context of determining if an investigational drug is a substrate of this CYP.

The advice is to routinely evaluate CYP1A2, CYP2B6, CYP2C8, CYP2C9, CYP2C19, CYP2D6 and CYP3A to determine which might contribute to the metabolism of the drug. If the drug is not metabolised by this primary set of CYPs then the recommendation is to evaluate CYP2A6, CYP2J2, CYP4F2 and CYP2E1.

There is no guidance on evaluating the possible role of a new drug in inhibiting CYP2J2.

Given it’s cardioprotective role, is there a case for evaluating inhibition of CYP2J2 by new drugs? It will be interesting to see whether any changes in the guidance emerge as we learn more. 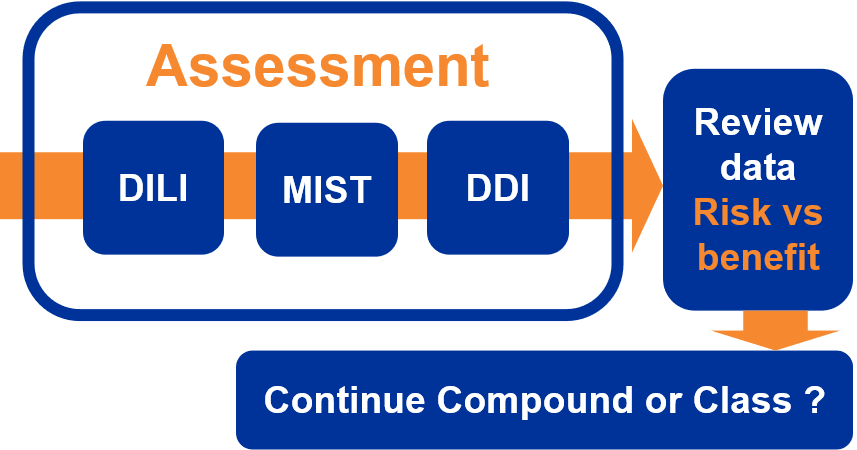 De-risking DMPK: what’s key? By Guy Webber Drugs can fail i) before they enter clinical development in humans ii) during clinical trials or iii) after
Read More > 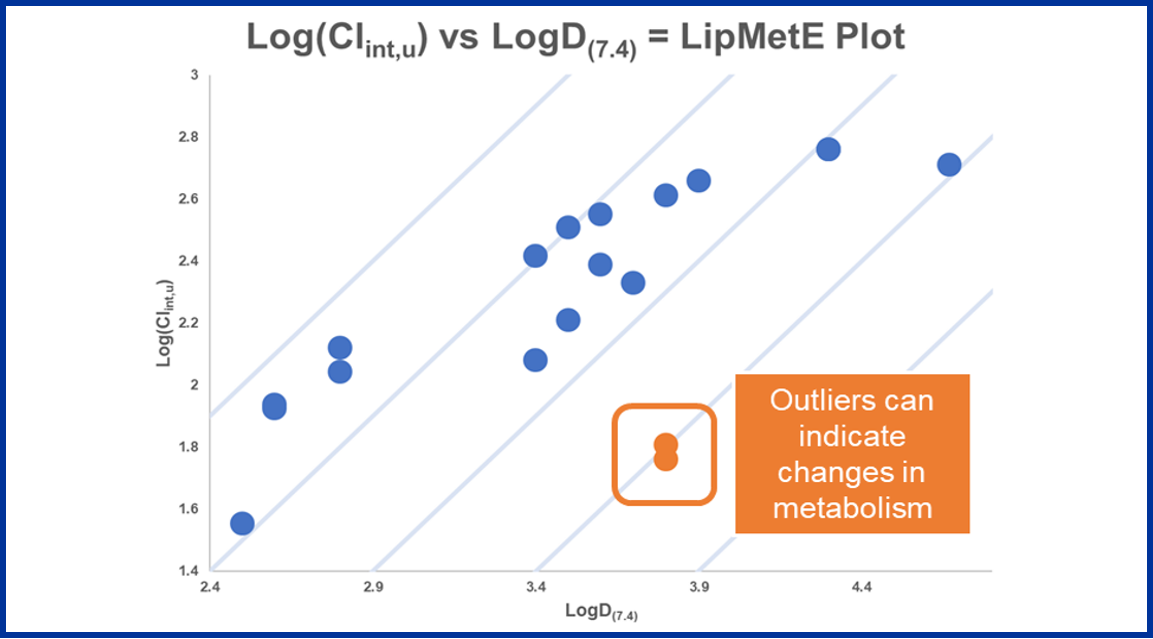 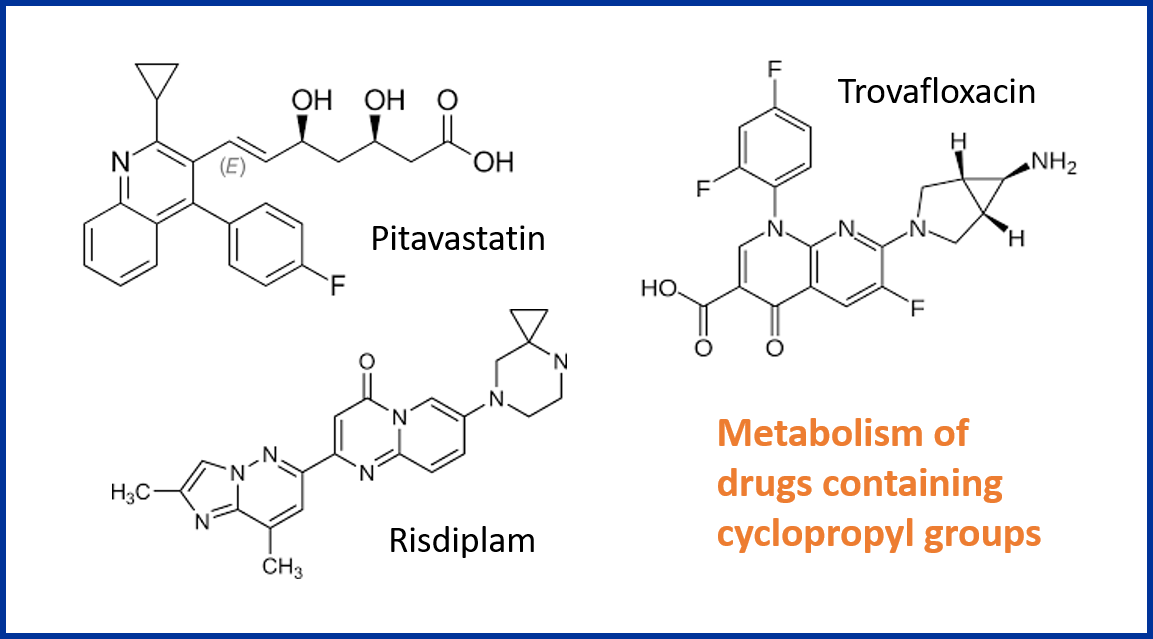