Dihydrodiol metabolite synthesis is possible through various routes including mammalian and fungal biotransformation to make trans-dihydrodiols. In addition to the synthesis of dihydrodiols, we are also able to purify particularly difficult-to-access dihydrodiols present in small quantities in biological matrices for structure elucidation by NMR spectroscopy.

The formation of dihydrodiol metabolites of drugs is catalysed by various cytochome P45Os such as CYP3A4 and CYP1A1, followed by the action of epoxide hydrolase. They are a potential concern due to the reactive nature of the epoxide intermediate and the risk of covalent binding to proteins.

Dihydrodiols can be further metabolised by dihydrodiol dehydrogenases, a family of enzymes which catalyse the NADP-linked oxidation of trans-dihydrodiols of aromatic hydrocarbons to the corresponding catechols.

Dihydrodiol metabolites can be formed from the action of CYP enzymes on aromatic systems to form an epoxide which is then acted on by microsomal epoxide hydrolase to yield a stable dihydrodiol. Following screening of a client compound in various systems, it was evident that the dihydrodiol metabolite sought was best produced using microsomes of a particular species from a specific supplier source. Multiple batches of scale-up incubations and purifications were undertaken at a 30% conversion yield to deliver hundreds of milligrams of material to the client at > 95% purity by LC-ELSD.

In this project a suspected dihydrodiol metabolite of a drug compound was required. Following an extensive screen where several +34 Da metabolties were produced, only small quantities of the target dihydrodiol were matched in one mammalian S9 system and one fungal species. Since it is cheaper to scale-up microbial biotransformation reactions, 10 L of a fungal whole cell biotransformation reaction was performed, from which 100 μg of the metabolite was isolated for cryoprobe NMR. Standard methods were used to acquire 1H, COSY, HSQC, HMBC and NOESY NMR spectra, interpretation of which permitted the elucidation of the structure of a trans-dihydrodiol.

Carbamazpine is a widely used anticonvulsant, however it has a narrow therapeutic index and is associated with a variety of idiosyncratic drug reactions. It is metabolised by CYP3A4 to the active metabolite carbamazepine-10,11-epoxide, which possesses a potent anticonvulsant effect. Subsequently, the epoxide is hydrolysed via microsomal epoxide hydrolase, to an inactive metabolite carbamazepine-10,11-trans-dihydrodiol, which is excreted in the urine.

One of Hypha’s PolyCYPs enzymes, PolyCYP359, produces the epoxide metabolite of carbamazepine at a 25% conversion of the parent drug in the initial screen, rising to 40% conversion in the optimised scale-up reaction.

The cancer drug ibrutinib inhibits B-cell proliferation and survival by irreversibly binding Bruton’s tyrosine kinase. Blocking BTK inhibits the B-cell receptor pathway, which is often abnormally active in B cell cancers. Metabolism occurs via three major pathways (Scheers et al., 2015) – hydroxylation and sulfate conjugation of the phenyl, opening of the piperidine, and CYP3A mediated epoxidation of the ethylene on the acryloyl moiety with further hydrolysis to a dihydrodiol metabolite (PCI-45227 / M37). The dihydrodiol is a prominent circulating active metabolite in blood and plasma with levels generally exceeding that of the parent.

KZR-616 is an irreversible tripeptide epoxyketone-based selective inhibitor of the human immunoproteasome and is being developed for potential treatment of multiple autoimmune and inflammatory diseases.

Metabolism profiling of KZR-616 in human hepatocytes indicates that the major metabolite is an inactive diol (KZR-59587) generated from microsomal epoxide hydrolase (mEH), and not by CYP3A4/5 (Fang et al., 2021)

Explore our library of resources comprising brochures, case studies, posters and publications about the work we do.

Production of Human and Novel Non-mammalian Metabolites of Cyclosporin A

It is well known that metabolites of drug compounds may have different efficacy and properties to that of the parent compound. Investigation and production of these metabolites is critical for exploration and understanding of SAR, and to ensure thorough patent coverage. Metabolites can also be sourced to create antibodies used in development of assays for therapeutic drug monitoring.

Access to multiple metabolites needed to support clinical development is not always straightforward, and can sometimes mean that more than one technique needs to be applied to fulfil requirements. In one such project, a US pharma client required > 200 mg of three metabolites of a drug; an N-glucuronide (M1), an indirect O-glucuronide (M2b) and a hydroxylated metabolite (M8b). As part of this project, multiple components of Hypha’s one-stop metabolite shop were employed, including chemical synthesis, microbial biotransformation as well as purification and structure elucidation by NMR. 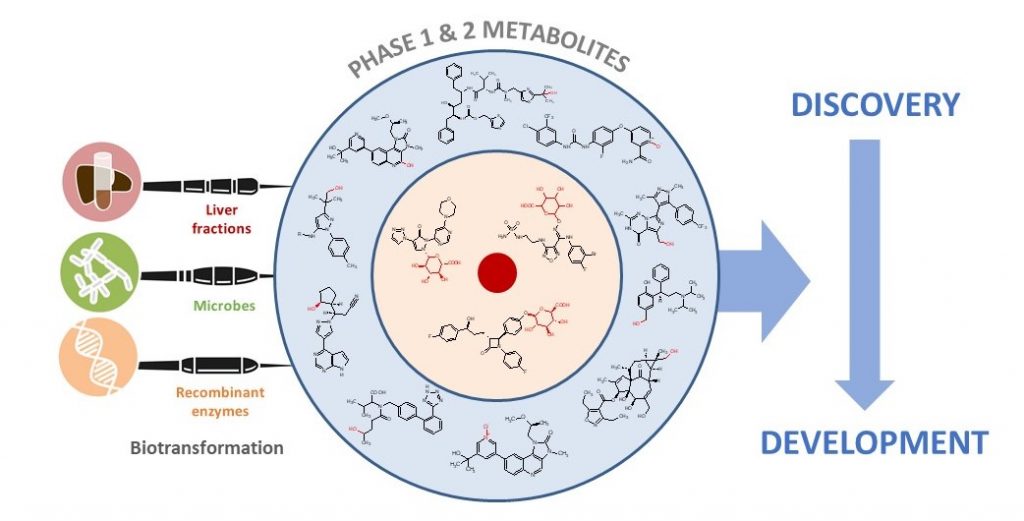 Biotransformation: Impact and Application of Metabolism in Drug Discovery

In this paper, authors from Hypha and Incyte Corporation discuss the impact and application of biotransformation of drugs by mammalian systems, microorganisms, and recombinant enzymes, covering active and reactive metabolites, the impact of the gut microbiome on metabolism, and how insights gained from biotransformation studies can influence drug design.

Hypha Discovery has been a valuable metabolite ID partner. Hypha have provided biotransformation, metabolite purification and structure elucidation answers to some of our most challenging metabolism and metabolite ID problems. We really appreciate the breadth of expertise available at Hypha Discovery and will definitely reach out for future work.