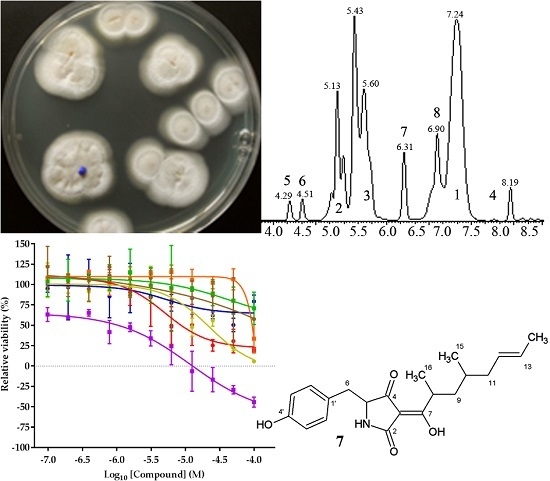 As part of an international research project, the marine fungal strain collection of the Helmholtz Centre for Ocean Research (GEOMAR) research centre was analysed for secondary metabolite profiles associated with anticancer activity. Strain MF458 was identified as Tolypocladium geodes, by internal transcribed spacer region (ITS) sequence similarity and its natural product production profile.

By using five different media in two conditions and two time points, we were able to identify eight natural products produced by MF458. As well as cyclosporin A (1), efrapeptin D (2), pyridoxatin (3), terricolin A (4), malettinins B and E (5 and 6), and tolypocladenols A1/A2 (8), we identified a new secondary metabolite which we termed tolypocladenol C (7). All compounds were analysed for their anticancer potential using a selection of the NCI60 cancer cell line panel, with malettinins B and E (5 and 6) being the most promising candidates. In order to obtain sufficient quantities of these compounds to start preclinical development, their production was transferred from a static flask culture to a stirred tank reactor, and fermentation medium development resulted in a nearly eight-fold increase in compound production. The strain MF458 is therefore a producer of a number of interesting and new secondary metabolites and their production levels can be readily improved to achieve higher yields.