Here we explore some of the potential impacts of hydroxyl groups in medicinal chemistry, contextualising opportunities alongside other fundamental structural changes and considering the physical consequences of its introduction.

Introduction of a hydroxyl group, along with methylation, fluorination, and heterocyclic nitrogen, was one of four tactics highlighted as means of making profound changes in molecular behaviour in the optimisation of drug molecules (Table 1) [1]. Except for methylation and aryl-fluorination, all these groups generally reduce the lipophilicity of molecules and introduce polar functionalities that necessarily need to make positive interactions with targets to retain activity (and generally improve selectivity) in an SAR series.  Each substitution can have profound influence on the conformational dynamics of the molecule. 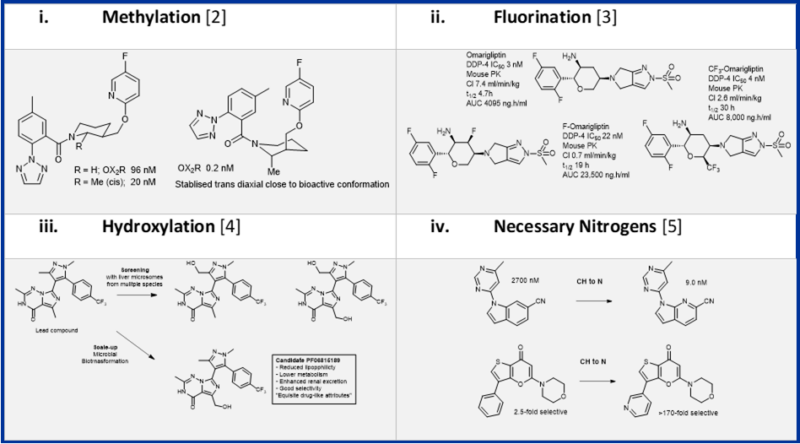 Of these techniques hydroxylation is perhaps least often considered, despite increasing opportunities for its introduction through late-stage functionalisation of existing molecules, though an increasing arsenal of synthetic and biosynthetic reactions.  Such derivatisation could be complemented by fluorination through modification of the technique or reaction with the introduced hydroxyl.

Hydroxylated structures are ubiquitous in natural products and metabolites [7], disproportionately so in comparison to small molecule drugs as assessed in a recent review (Figure 1). This insightful perspective also gives a good summary of the binding energetics and hydrogen bonding properties of hydroxy groups [8]. 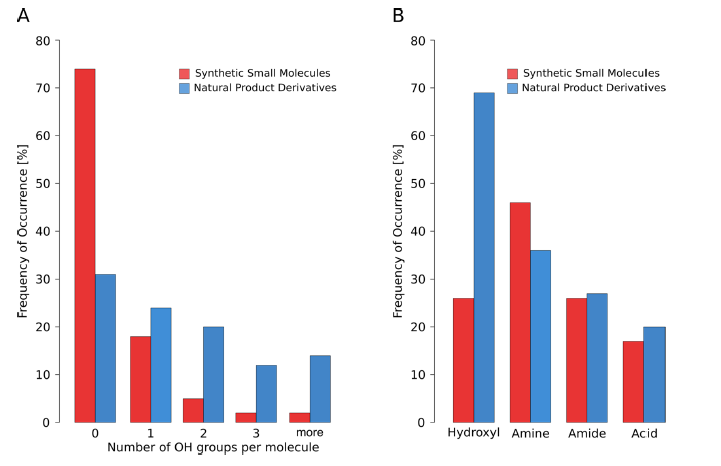 The sometimes controversial, but highly logical and backed by empirical data, hypotheses about all molecules crossing membranes on transporter/carrier proteins developed by Douglas Kell [9] are worth considering in the context of the distribution of hydroxyls in natural products.  Kell argues that carrier proteins evolved because of their proclivity for enabling the movement of beneficial exogenous natural products across membranes [10] and, furthermore, there is an inherent “metabolite-likeness” in approved drugs [11].

Considering observations and hypotheses above, the hydroxyl could thus be regarded as being rather underutilised in synthetic small molecules in drug discovery programmes.

Additionally, there is an increasing appreciation of the common recognition elements of natural processes – it is logical to consider that the product of a reaction at a site recognised by a protein should have a reasonable chance of being recognised by another protein – be that a target or transporter protein [12]. Furthermore, if the hydroxylated molecule was produced by an oxidative process, a potential metabolic weak spot is inherently addressed.

The physicochemical impact of hydroxylation

The reduction in lipophilicity of about 1.5 to 2 log units (i.e., around a 30 to 100-fold change in Partitioning between Octanol and Water) due to an alkyl hydroxyl is demonstrated in the Clog P data in Figure 2a.  Additionally, the role of hydroxyl as a pKa modulator in comparison to the frequently used fluoro-substituent is illustrated in Figure 2b, noting that hydroxyl reduces the inherent lipophilicity (Clog P) more but has a less electron withdrawing effect and thus a lesser reduction in pKa – yet the net effect is a bigger impact on the pH 7.4 distribution coefficient (cLog D7.4) for OH, potentially useful for fine tuning of properties.

Figure 2b. Changes in calculated Distribution coefficient (based on pKa and CLogP, Daylight package in ChemDraw®) illustrating subtly different impacts of hydroxyl vs fluoro- substituents. 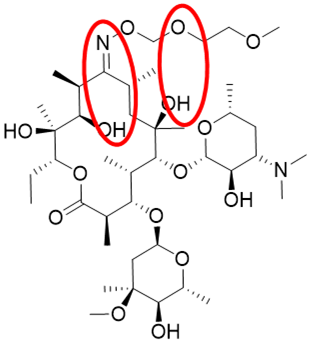 Increasingly the importance of intramolecular hydrogen bonding, often mediated by hydroxyl groups in nature (e.g., the semi-synthetic macrolide antibiotic Roxithromycin [13], Figure 3), is recognised in the chimeric behaviour of many molecules, notably in larger and macrocyclic structures [14].

The “Gauche effect” – the impact of hydroxyls on conformational constraint

An underappreciated aspect of hydroxyl groups is their potential impact on conformational constraint – in a similar vein to fluoro- substituents [15] that favour a gauche conformation of the hydroxyl to a heteroatom or charged centre [16]. This effect is known to involve stabilising hyperconjugative interactions between donor (bonding, σC–H) and acceptor (antibonding, σ*C–OH) orbitals, thus rationalising the generic conformational preference of HO–Cβ–Cα–X systems (ϕFCCX ≈ 60°), even at the potential expense of steric clashes (Figure 4a) [17].

Figure 4a. Illustration of the preferred gauche orientation of hydroxyls to electron with electron withdrawing heteroatoms, exemplified as an amine.

This is illustrated with a structural nuance observed in a GSK X-ray structure, the observed trans diaxial conformation explained by the gauche effect (Figure 4b) and potentially an intramolecular hydrogen bond? 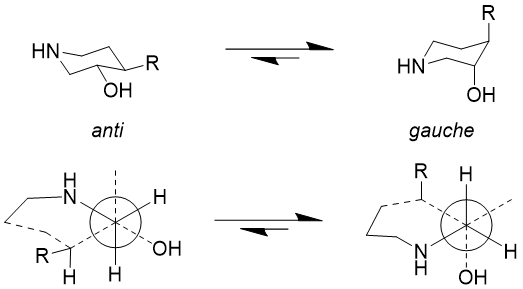 Figure 4b. Impact of the gauche effect on the preferred trans diaxial conformation of a 4-substituted piperidin-3-ol.

The subtleties of conformations and basicity modulation in 3-substituted piperidines was systematically studied by Schnider et al. [18] in an informative paper and conformational studies on diastereomeric piperidine alkaloids [19] (Figure 5) show the potential significance of the interaction (citing likely intramolecular hydrogen bonding, which would likely be pH as well as solvent-dependant).  This is clearly an area for further investigation – whilst noting the potential for such nuances.

Figure 5. Conformational effects observed in piperidin-3-ols ins a series of piperazine where significant populations of gauche conformations were observed by NMR.

Oxidation and/or conjugation – a natural means of defence

In further consideration of the evolutionary basis of beneficial molecular recognition, attention to defensive mechanisms against xenobiotics should be considered.  Amongst transporters, efflux pumps and membrane barriers the role of oxidative process is a key weapon in the armoury to remove unwanted molecules.  At extremes of lipophilicity, poor permeation prevents membrane penetration/absorption from the gut, so it is probably not a coincidence that the optimum lipophilicity range for cytochrome P450-driven processes is like that for maximum chance of permeation [20]. Not every molecule will be oxidised – so there is a degree of “natural recognition” by protein structures in operation too, allowing beneficial molecules to escape the process. To reinforce the action of oxidative processes, glucuronidation, sulphation and other conjugative reactions evolved to further solubilise lipophilic (thus inherently poorly water soluble) xenobiotics (Figure 6). Fear of encountering secondary conjugative processes such as glucuronidation might be a barrier to inclusion of hydroxyls in potential drugs, yet there are many hydroxylated drugs and beneficial naturally hydroxylated metabolites.  Perhaps empirical data and applied computational analyses could help define the recognition processes important in glucuronidation and other conjugation reactions, such that the nature of hydroxyls subject to minimal conjugation might be identified. Could an in vitro screen for extent or rate of glucuronidation be a useful tool in the drug discovery toolbox? 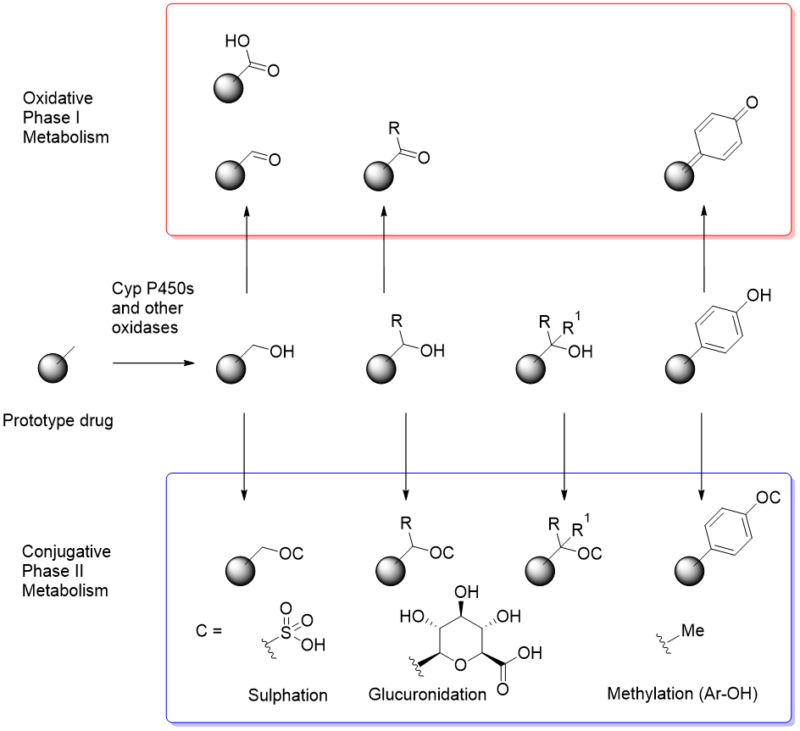 Hydroxylated building blocks are available, often in a suitably protected form (is this another barrier to their use?), so there is no excuse for not adding them to an array. But this is an arena ripe for late-stage functionalisation, be it by traditional oxidation, some modern electro- or photo-chemical technique, or, through biotransformation methods such as PolyCYPs enzymes.  Use metabolism predictors to try to understand the most likely site of oxidation (not necessarily how likely it is to oxidise…); this might help with understanding (or blocking) intrinsic clearance. The beauty of enzymes is that they can break synthetic rules, so unexpected oxidation sites may well be accessible.

This short piece is intended to highlight underlying logic for increased exploration of hydroxyls in medicinal chemistry, coupled with some, perhaps underappreciated, physicochemical nuances associated with its introduction. Nature exploits hydroxylated molecules to provide considerable benefit, so why shouldn’t drug hunters? Especially in a world where appreciation of natural molecules is superseding the depths of problematic petrochemicals that fuelled the age of high throughput screening and multiple parallel reactions!

[6] Adapted from Jordan, A.M & Young, R.J. in The Handbook of Medicinal Chemistry: Principles and Practice (The Royal Society of Chemistry, 2022, in press). 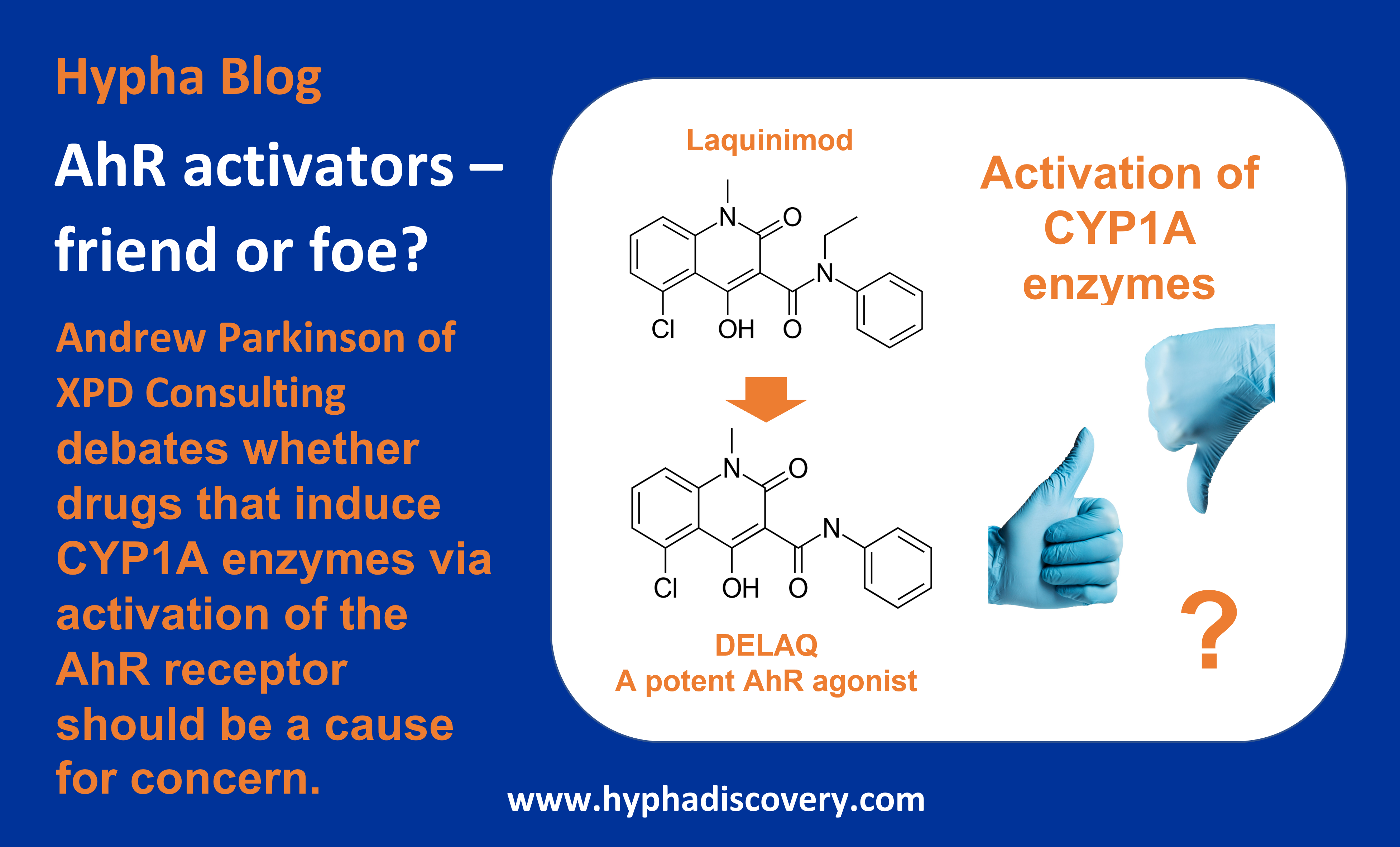 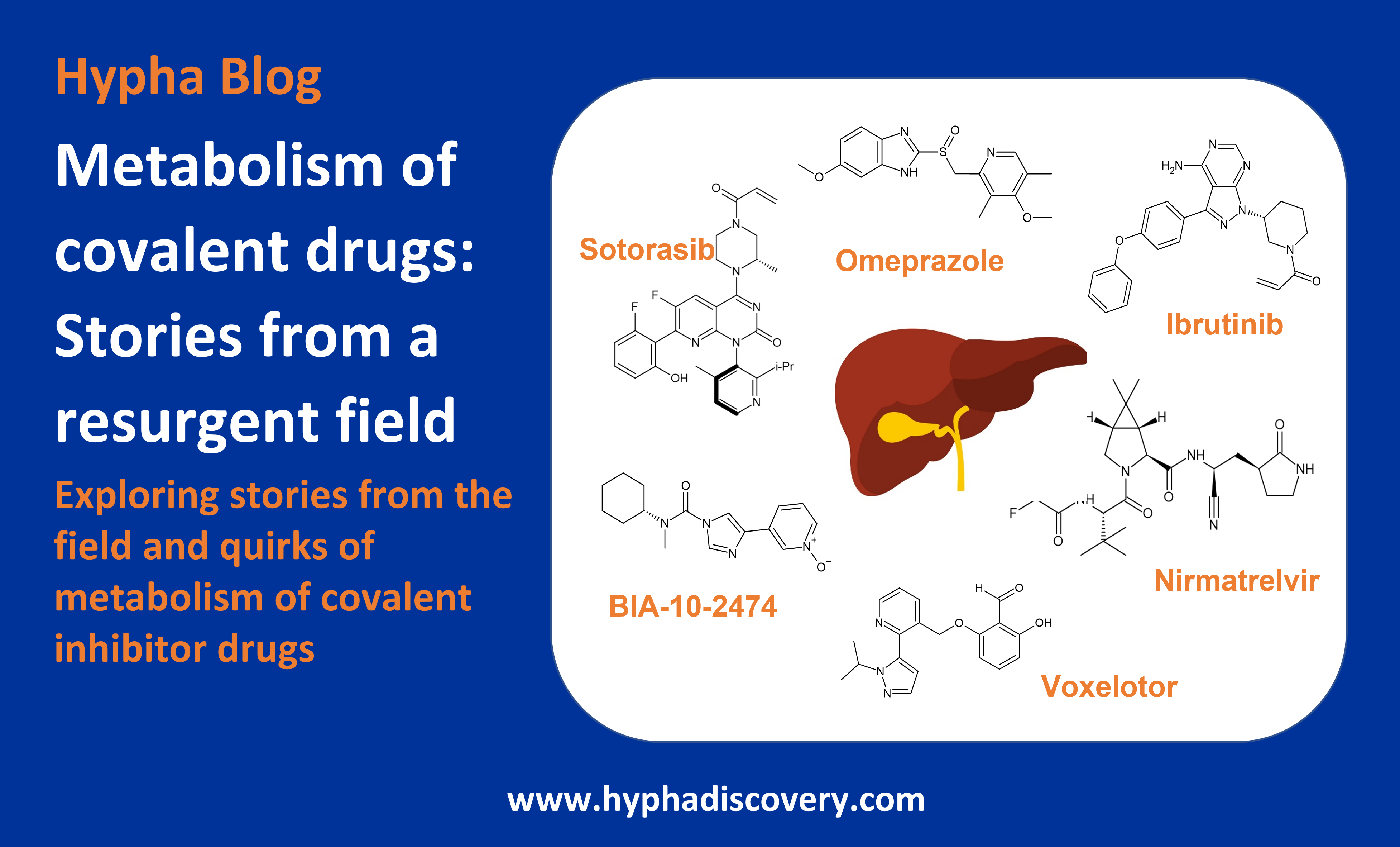 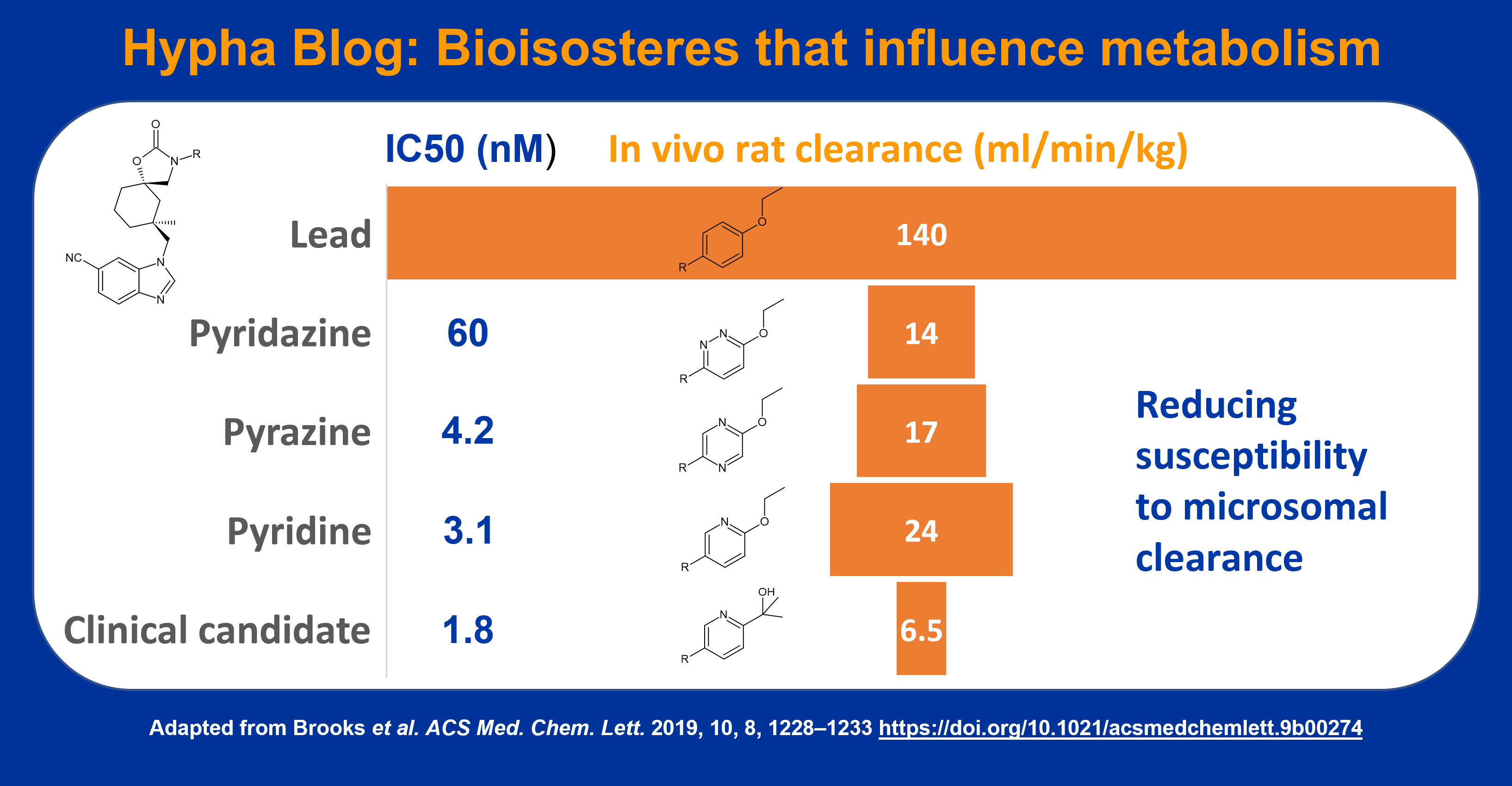